The 2 Financial Pillars of Sarine Technologies

I have previously written a post about my thoughts on Sarine Technologies and the effect of its revenue and net profit on its roller-coaster share price.

As investors, we often take the financial results at ‘face value’, and in my case, I am sometimes too lazy to read more deeply into the reports. Let’s face it, reading annual reports and quarterly reports can be quite daunting and tedious at times.

However, every business is unique and for some companies, there are more to the headline revenue and profit numbers. We just need to spend a wee bit of time and effort checking it out.

It is easy to see from the above chart that for the 9M 2017 results, the sharp decrease in the profit from the operation has dragged down the revenue and net profit.

As stated by Sarine Technologies (read here), for 9M 2017, the Group recorded a decrease of 15% in revenue to US$45.7 million. The decrease was mainly attributed to lower sales of capital equipment in Q3 2017. Due to the buildup of higher than normal inventories of polished diamonds in the midstream in the third quarter, manufacturers slowed production and reduced capital expenditure.

In the case of FY 2015, as stated by Sarine Technologies (read here), diamond manufacturing activities dropped significantly, by 30- 50%. Overly aggressive rough diamond pricing and stagnant polished diamond prices. Higher than normal polished diamond inventory level at end 2014. The decrease in profitability on a year-over-year basis was primarily due to significantly lower sales due to the challenging industry conditions in FY2015.

Interestingly, the 9M 2017 net profit is already higher than the FY 2015 net profit.

I view the situation of aggressive rough diamond pricing and stagnant polished diamond prices as unsustainable and will eventually correct itself. Being a bottom-up investor, I tend to focus more on the company’s fundamentals rather the macro industry conditions.

Through new products and services, the company has entered the higher value-add downstream retail segment of the industry, which is more than twice the size of its traditional midstream market and commands higher valuations.

The downstream market is significantly larger than midstream, generating revenues of around US$74bn compared to US$19bn in 2016.

The 2 Financial Pillars of Sarine Technologies

Before I go on, in terms of balance sheet, Sarine Technologies is one of the few listed companies in the SGX with a cash hoard and zero debt.

The cash hoard amount has been fairly consistent. 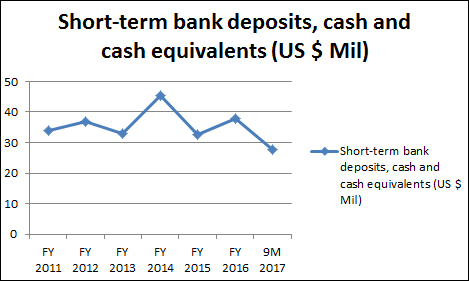 In most years, the earnings has been more than sufficient to pay for the annual dividend (except for FY 2015 and maybe 2017). There is no need to dip into the cash hoard to issue as a dividend.

Well, the above is fairly obvious.

This part is less obvious to some. As stated earlier in the post, I am sometimes distracted by the revenue and net profit announcement and attribute it to lower sales (and perhaps the bigger macro diamond industry conditions).

Actually, if we study the recurring revenue of Sarine Technologies, we can see why it is a strength in its own right.

“One of its key products, the Galaxy family, has no competition in the automated inclusion mapping systems market. As of 31 December 2016, Sarine Technologies had a total installed base of 299 systems worldwide. These systems have helped to contribute to Sarine Technologies’ recurring revenue.”

Historically, Sarine’s revenues were entirely driven by equipment sales, which are heavily concentrated in India and were volatile. The company modified its business model to charge usage fees for its products, starting with the launch of the Galaxy family of products in 2009. 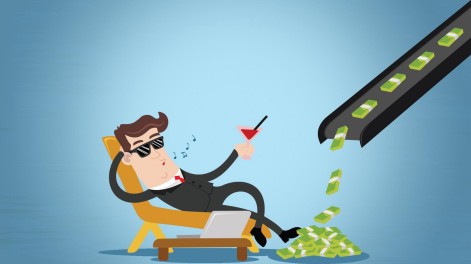 The relevant product families for planning and optimization are Galaxy, DiaExpert and Advisor software. In addition to selling the equipment, Sarine applies a per-usage charge per carat. A pay-per-use service at a higher price is also available at its services centers in Mumbai, Surat, Ramat-Gan, Antwerp, Moscow, Johannesburg, Gaborone, Windhoek and New York.

Integrated with its planning equipment are its systems for cutting, shaping, polishing and finishing of rough diamonds (Quazer, Strategist, DiaMension and Instructor software). These services are also available as a per-carat service in multiple locations.

Personally, I view recurring revenue as the holy grail of companies’ profit. If a company can somehow have minimal expenditure (once the system is in place), and collect recurring income either via the sales of upgrading software or products, rental fees of equipment, fees from maintenance and services, it will be great.

The business model is scalable. Profitability is maintained or even increased even though revenue (and capacity) increases. This is quite similar to many tech companies which have strong business moats. Which why investors are often willing to pay a premium for their stocks, resulting in high P/E ratios/valuations.

The Recurring Revenue is also fairly ranged bound as compared to the Profit from Operation and Net Profit. Eg, does not fluctuate that wildly.

Theoretically, over time, with an increased base of Galaxy systems, the recurring revenue will do more to help financially.

In addition, during bad times, the company can theoretically tighten on the R&D and marketing expenses of new products and just ‘cruise by’ base on the recurring income. Moreover, Sarine Technologies does not need to worry about debt and liquidity issues. Although this will not be good in the long term and I don’t think Sarine Technologies is doing that. However, it is totally possible.

In many of the companies I invest (or have invested in before), I tend to like businesses with recurring income. Eg. Vicom, IsoTeam, Colex, Fu Shou Yuan…

Perhaps this is why many investors like investing in REITs or Healthcare stocks. There is this recurring aspect of the business which is less cyclical and less dependent on macroeconomic conditions.

The total installed base of Galaxy System has been steadily increasing over the years. And currently, there is no legitimate competition for the Group’s automated inclusion mapping systems in the market.

Oddly, despite the above mentioned, it is observed that the recurring revenue has been range bound, or more specifically, did not continue upwards after FY 2014. It could be due to the bad macro diamond industry conditions during those periods. However, it could also be due to the fraudulent use of Sarnie Technologies Galaxy® inclusion mapping technology and systems by manufacturers.

Nevertheless, Sarine Technologies have been active in their legal efforts against these technology infringers. So far, the related news has been encouraging.

In addition, Sarine Technologies has started expanding their recurring revenue base, through increasing market penetration for sales programs utilizing the Sarine Profile. This is to target the polished diamond retail-related segment. So it is not just recurring revenue from the downstream portion but also upstream portion of the industry.

Born in 1976. Married with 2 kids (a boy and a girl). A typical Singaporean living in a 4 room HDB flat. Check out my Facebook Page: https://www.facebook.com/apenquotes.tte.9?ref=bookmarks
View all posts by apenquotes →
This entry was posted in Sarine Technologies Ltd. Bookmark the permalink.

7 Responses to The 2 Financial Pillars of Sarine Technologies