To be frank what initially attracted me to Japan Foods recently is its dividend. In its website, the company highlighted that the Board intends to recommend and distribute not less than 40% of the Group’s audited consolidated net profits attributable to Shareholders as dividends annually.

As mentioned in my previous post, Japan Foods’ dividend yield looks tempting at 4.06% in 2017. Among the highest in the consumer stocks family (if not the highest).

The question is: Is Japan Foods’ dividend Sustainable?

Fundamentally, Japan Foods is also strong financially. It has zero debt and approx. SGD 20.5 mil in cash. (See below)

And on top of that, sophisticated investors have been buying the share of this stock from Feb 2016 to 11 Dec 2017. See below. 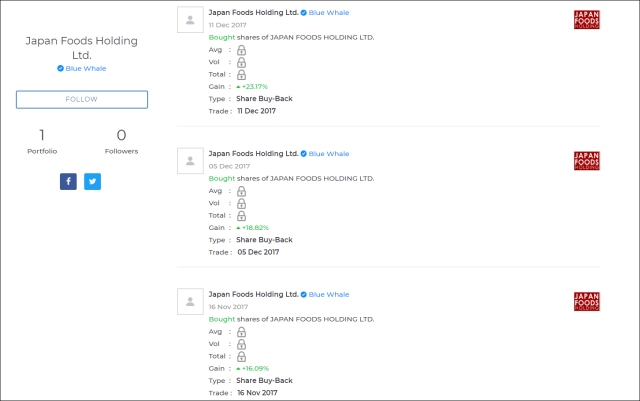 However, one particular figure (or shall I say trend) is worrying – and that is its payout ratio. The table below from its website shows that the dividend payout ratio has been steadily increasing and went as high as 92.2% in FY 2016.

The payout ratios differ from what is shown in Morningstar (strangely). See below. 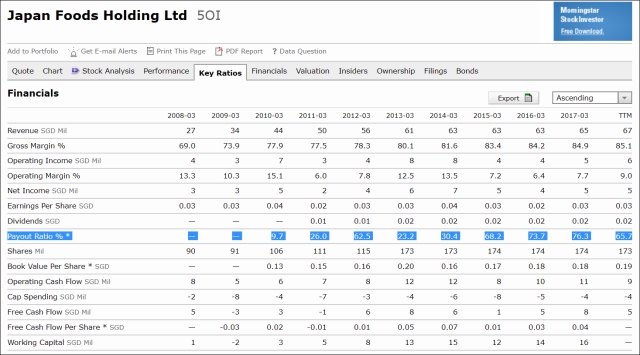 Nevertheless, the trend seems to be going (nothing but) up. Whether it is at 92% or 76%, it is still high. Payout ratios have tremendous prediction power as they indicate what stage of business a company is in.

A payout ratio that is between 75% to 95% is considered very high. It implies that the company is bordering towards declaring almost all the money it makes as dividends. This increases the risk of the company cutting its dividends because our formula is forward looking. To maintain a healthy retention ratio, the company would either not grow its dividend or cut it down. (read here)

This coupled with the fact that although the net profit shows an overall CAGR of 11.1% from FY 2011 to FY2017, the ‘trend’ isn’t all that straight forward (eg. not having an obvious upward trend).

Hence, it is not that clear as to how Japan Foods can sustain its dividends if situations suddenly change for the worse (given how fickle the F&B industry is). Sure, it can dip into its cash hoard to sustain its dividend in the short term, but not for the long run.

I am sure if you are an income (dividend) investor, you would want to hold on to your dividend paying stock for the long run (and not see its dividend suddenly diminish or vanish).