Before I go into Fu Shou Yuan International Group Limited, let me start off with my thoughts on my stock portfolio.

I typically don’t change the components of my stock portfolio much. In other words, I don’t trade often and am basically quite ‘lazy’ or ‘hands-off’ when it comes to managing my portfolio.

However, in recent times, I had to say goodbye to a number of stocks in my portfolio. Not because I sold them away, but rather it was because they were delisted. See below:

So even though I did not ‘sell’ my stocks, my cash component still increased in recent times. I did achieve realized a profit from the cash offer for Lyxor Japan and Nirvana. But still, I would much rather they stay in my portfolio for a longer period of time/years.

If I include the cash offer for Lyxor Japan ETF (which I have already received) and the estimated cash offer for Nirvana Asia (which I have yet to receive), the cash proportion will be approximately 14% (see below). Still relatively low proportionally. However, I reckon I have significant war-chest…. to start thinking of what to do next.

However, before I continue, I still think now is still not the time to start buying shares actively. US markets are still high, while the Singapore market is range bound. In short, “blood is not on the street” yet.

Nevertheless, it is always a good time to read about potential stocks. A few stocks have been on my radar in recent times and I have written about them. See the below list.

As mentioned earlier, one of the stocks in my portfolio will be delisted soon – Nirvana Asia Ltd. I like this company and its business (Death-care). With the delisting of this stock, I do hope to find another stock which is in the same industry and fundamentally similar to replace it.

I have previously written about the listed Deathcare companies and Nirvana Asia in Oct 2015 (read here).

Reading through what I have written previously, Fu Shou Yuan appears to be a good candidate. It is listed on the Hong Kong Stock Exchange.

The beauty of a deathcare company is that it is relatively immune to recessions or economic slow-downs. As mentioned in the Chairman Statement in Fu Shou Yuan 2015 Annual report:

Although China’s economic growth has slowed down, the core business still managed to achieve robust growth due to the relatively limited impact of the economic cyclical fluctuation on the death care industry.

A bit about the company:

The main revenue generator is from Burial services as shown above.

Of which, the majority of the revenue comes from Shanghai. 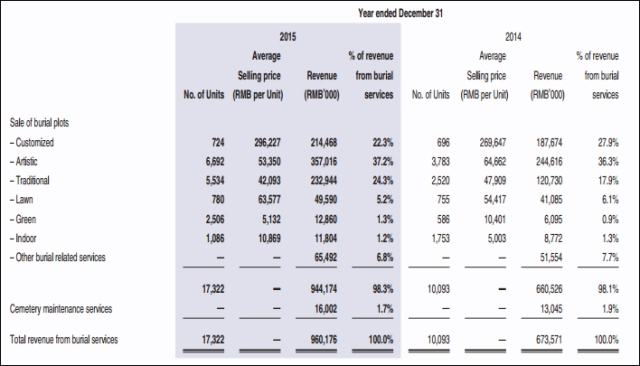 The selling prices of burial plots of each cemetery vary according to local market conditions. They have twelve cemeteries in operation as of December 31, 2015, and have been deriving revenue from them. They achieved remarkable growth for 2015 in almost every cemetery where they operate as compared to 2014.

It does have relatively better financial fundamentals (See below).

Looking at the above figures:

I am neutral on the Management effectiveness. The Return on Equity at 15.02% is ok. Not fantastic but acceptable.

In general, the fundamentals of the company is alright. Not exactly a growth stock (eg. ROE >20%). Its balance sheet is great, but its valuation appears expensive.

Although the history does not guarantee the future, however, frankly that is the only fact we have. See below charts (Data from Morningstar).

The revenue, operating income, and net income have all been trending up over the years. Which is good.

The company has been increasing the dividend payout in recent years. However, the payout ratio has also increased – although the ratio is not alarmingly high (less than 30%). 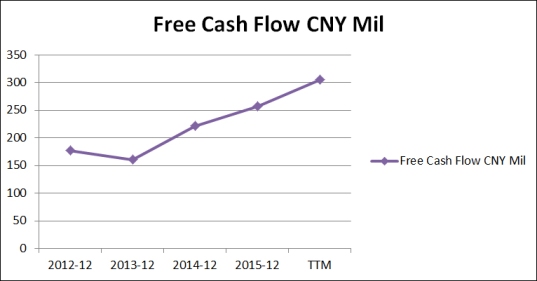 The free cash flow has been steadily increasing over the years. Which is great. 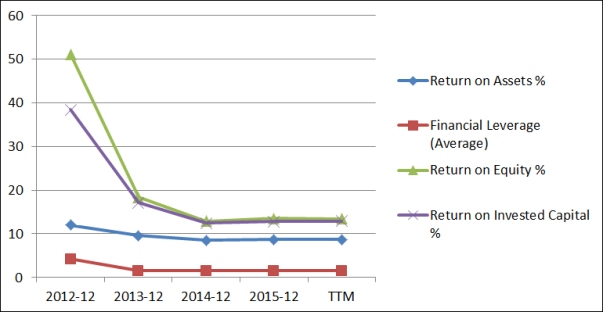 This chart looks worrisome. In general, ROA, ROE, and ROIC have been trending downwards, while financial leverage remains stable at low levels. Well, a good sign is to see at least ROIC was stable in recent years.

Looking at the above charts, in general, the fundamentals have been trending up over the years, especially the Net Income and Free Cash Flow. In addition, the dividend has been increasing.  However, the increase in income did not translate to better ROE and ROIC in recent years… and given the relatively short history, I wonder if this stock would be “investor friendly”.

First, let’s look at the estimated 5 years earning growth. We are going to use a time-frame of 5 years from now for this purpose. Given EPS and a PE ratio, the stock price can easily be calculated for any company. Using the below formula.

I like the business model of this company and the fact it is the largest death care services provider in the PRC. From what I have read, it is still actively growing its business. The Death care industry is a pretty recession proof industry.

However, I am always careful when it comes to China-linked stocks. And moreover, it was only recently listed in Dec 2013. There isn’t much historical data.

It does not have a high dividend yield and its ROE and ROIC have not been trending up in recent years.

The valuation of the stock is rather expensive, and the trailing PEG also show that the stock is over-valued. The intrinsic value is higher than the current stock price, but the margin of safety is not big (well – I did, after all, took a 20% discount for the compound growth rate). I would want a bigger buffer for China-linked stocks.

I like the fact that the stock price has been trending downwards in recent months.

Well, good stock nevertheless. Still expensive- will be keeping an eye on this one.

Yup, still waiting for the storm to come.

Born in 1976. Married with 2 kids (a boy and a girl). A typical Singaporean living in a 4 room HDB flat. Check out my Facebook Page: https://www.facebook.com/apenquotes.tte.9?ref=bookmarks
View all posts by apenquotes →
This entry was posted in Fu Shou Yuan, Hong Kong Shares. Bookmark the permalink.