In my search for value (stocks), one stock/company has been consistently popping up – Straco Corp Ltd.

Why Straco caught my attention

1) The stock price has been hovering near the 52 week low (now not exactly near the lowest though).

2) The company management has been repurchasing their company shares in recent times:

3) Well, in Dec 2015, The Motley Fool pointed out that Straco has the following good attributes (read here):

After all, according to The Motley Fool, it is one of the 2 Rock-Solid Stocks For 2016.

So yes, it is definitely on my radar. 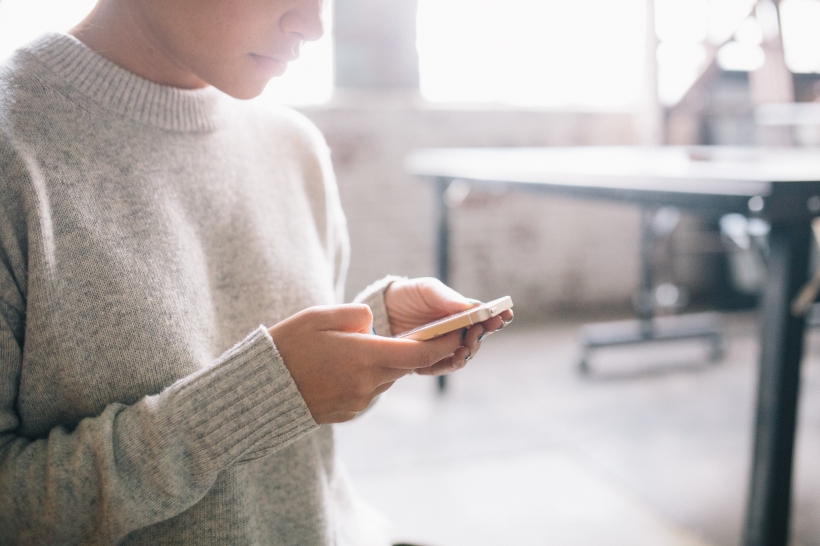 However, with the US markets at all time high, I wasn’t keen on investing yet or adding more into my portfolio. Well, the same can’t be said for the STI (Straits Times Index). For me, the performance of STI appears range bound (see below chart). It wasn’t too long ago (in June 2016) when the STI was considered as one of Asia’s worst performing indices.

Chart of the Day: The STI is one of Asia’s worst-performing indices (read here)

I have not been actively buying stocks for months and was, in fact, looking more in terms of dividend yielding stocks (for future buying when prices drop). Straco with a dividend yield of only 2.67% isn’t exactly the kind of income stock I was looking for. I would classify it as a growth stock with potential for capital gains.

Well technically, the dividend yield is 3.33% for 2016 so far, and the yield has been increasing each year since 2007 (see below). More on the dividend payout & payout ratio later.

A brief introduction to Straco Corp Ltd:
Straco is an owner and operator of tourism-related assets in China and Singapore. In China, the company has the Shanghai Ocean Aquarium, Underwater World Xiamen, and Lintong Lixing Cable Car attractions under its umbrella. As for Singapore, Straco had acquired a majority stake in the iconic Singapore Flyer in 2014.

I view Straco’s business as cyclical – as it is heavily reliant on tourism (which in general is cyclical). When times are bad, the tourism sector tends to be affected negatively. For instance, in 2011, the net income of Straco dropped.

Note: The August 2011 stock markets fall was due to fears of contagion of the European sovereign debt crisis to Spain and Italy, as well as concerns over France’s current AAA rating, concerns over the slow economic growth of the United States and its credit rating being downgraded.

Looking at the above figures:

Not exactly clear cut when evaluating the above. However, its balance sheet appears to be on the strong side while profitability (profit margin / operating margin) & ROE are great. So overall it is not bad.

Moreover as mentioned earlier, the company does have a history of a) An average return on equity of at least 12% since 2007 while having more cash than debt and b) A track record of consistent earnings growth since 2007. 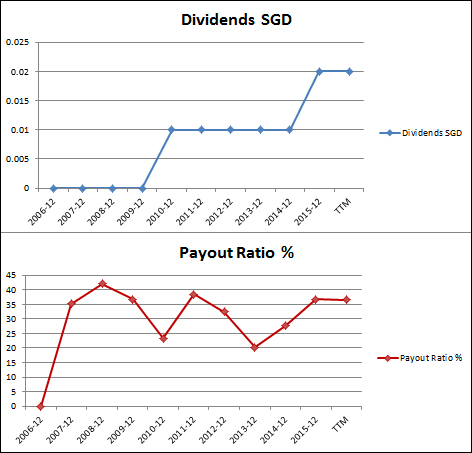 Despite the few years with low income and margins, the company has been increasing the dividend payout over the years, and the payout ratio has been pretty consistent (not too high, always below 45%- which is great).

The free cash flow has been steadily increasing over the years, except for a slight dip in 2011.

In general, ROA, ROE and ROIC has been trending upwards while financial leverage remains stable at low levels. However, in recent years the ROIC and ROA have been trending down slightly.

Another thing to note is that current ratio (which compares a firm’s current assets to its current liabilities) has been pretty erratic. However, it has been trending down through in recent years (see below). Acceptable current ratios vary from industry to industry and are generally between 1.5% and 3% for healthy businesses. If a company’s current ratio is in this range, then it generally indicates good short-term financial strength. Hopefully, it can fall within this range in the coming years.

The financial leverage and debt/equity have been both in the healthy range (eg. low values) over the years.

Looking at the above charts, in general, the fundamentals have been trending up over the years. However, the company is not exactly recession/market crash proof – as can be seen in the sudden drop in operating income and operating margin in 2010 and 2011. 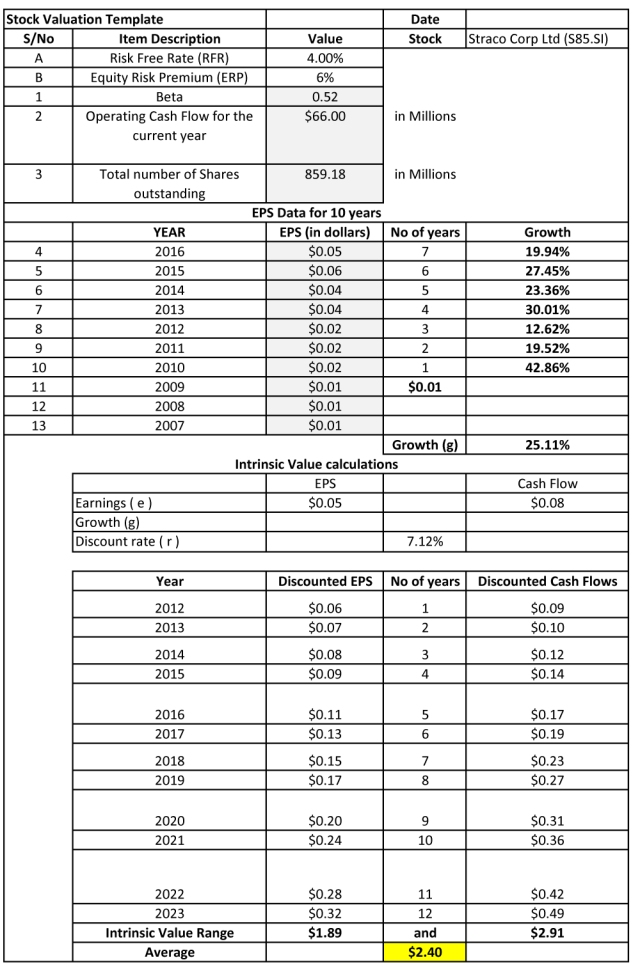 Hence the intrinsic value of Straco Corp Ltd is SGD 2.40.

Given the current stock price of Straco Corp Ltd on 9 Sept 2016 is at SGD 0.75, there is a big margin of safety base on the estimated intrinsic value.

In fact, the current share price is lower than intrinsic value by 69%.

Yes, it would perhaps be a good buy at this moment. However given the cyclical nature of this stock & US markets at all time high, I would want to wait a little while for markets to become depressed to pick this up at a lower price.

Nevertheless, I will be keeping an eye on this stock in the meantime.

I am still in the “building up my war-chest” phase.

Born in 1976. Married with 2 kids (a boy and a girl). A typical Singaporean living in a 4 room HDB flat. Check out my Facebook Page: https://www.facebook.com/apenquotes.tte.9?ref=bookmarks
View all posts by apenquotes →
This entry was posted in Straco and tagged Straco. Bookmark the permalink.