Truth be told, I haven’t been studying listed companies for some time. One reason is because I have been busy building up my passive cash flow via investing in P2P loans (Crowdfunding) and the second reason is probably because I felt that the prices should come down lower (before I consider dipping in).

Having said that I don’t expect this year’s stock dividend from my stock investments, to be exceptionally good. It could even be lower than last year’s.

Recently, I received a copy of the Shares Investment booklet (issue 532)  from my broker.

I usually just flip through the booklet as the information within it pertaining to each company is rather limited. Nevertheless, it does have a few helpful metrics such as the ROE and ROA (no, not P/E). However, in this issue, it has included a number of companies listed in the Malaysian market.

As usual, I was flipping through the booklet when I noticed that a number of Malaysia listed companies have exceptionally high ROE. Now, ROE by itself can be a misleading number as it could be debt-fueled (companies take on lots of debt to generate high ROE).

Funny how I have thought about listed companies in the Japan, Hong Kong and US markets but not those just across the Causeway… Well with the weaker Malaysian economy which suffered the stresses of the plunge in global crude oil prices and the depreciation of the Ringgit, it might be a good time to check out the fundamentally good listed companies there.

The high ROE Malaysian companies (which I found in the booklet) are:

Ok, after looking at their ROE, I have checked up on their balance sheets as well – Not all have pristine balance sheet I must say.

I also noticed that quite a number of these companies are the so-called ‘sin stocks. Sin stock sectors include alcohol, tobacco, gambling, sex-related industries, weapons manufacturers and the military. These companies are Carlsberg Brewery Malaysia Bhd, British American Tobacco Malaysia Bhd and Guinness Anchor Berhad. Just for interest sake, Karex Berhad, the world’s largest condom manufacturer is listed in the Malaysia market.

While reading the recent 2015 annual report, I can see that the outlook is not as fair for the alcohol industry here: 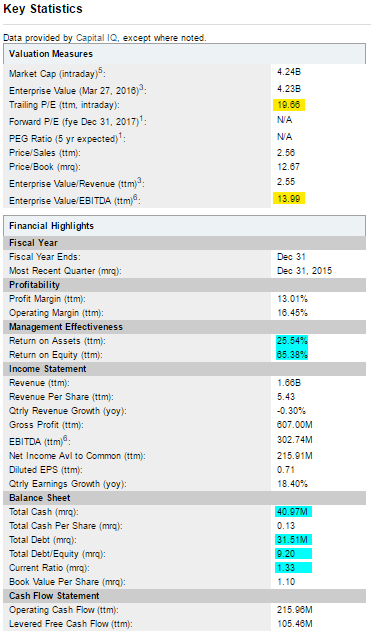 Now let’s look a bit further back and study the Earnings per share, Free Cash Flow, ROE and ROIC values. See charts below, data is from Morningstar.

Ok, these charts may not demonstrate the most perfect linear upward trend, but in general, these are upward trending over a long period esp. for FCF, ROE and ROIC. So yes, these are good. And the good thing is that current ratio (which compares a firm’s current assets to its current liabilities) has been trending down through the years (see below).

Let’s do a quick study on the current share price of Malaysian Ringgit 13.88 – via Trailing PEG and Intrinsic Value.

I will be estimating the future PE of Carlsberg Brewery Malaysia Bhd to be 17.88. (See below, data from Morningstar) Average of PEs from 2006 to 2015.

Given the current stock price of Carlsberg Brewery Malaysia Bhd at MYR 13.88, there is no margin of safety base on the estimated intrinsic value.

In fact, current share price is higher than intrinsic value by 88%.

Moreover current Price to Book value (most recent filing) is 12.65. (which could be lower)

However, the immediate outlook appears gloomy for the industry it is in. Hence it is worth waiting a while more to see if the company’s performance is still as strong in 2016.

As stated by its Chairman, Dato’ Lim Say Chong, in the recent annual report: “the Group has embarked on a programme called Funding the Journey which sets the framework, elements and deliverables for both our Malaysian and Singapore operations to unlock more growth potential and release funds for investments into our brands and people.”

Moreover, the trailing PEG and the study on intrinsic value suggest that current price is over-valued.

I shall observe this company more closely, and hopefully its narrative / outlook improve and the stock price drop below its intrinsic value.

Shall leave you with this song. I had spent a great long weekend with my family. It was fun watching my son play and just hanging out with my wife. Oh yes, we have watched the “Batman v Superman: Dawn of Justice” movie.

Born in 1976. Married with 2 kids (a boy and a girl). A typical Singaporean living in a 4 room HDB flat. Check out my Facebook Page: https://www.facebook.com/apenquotes.tte.9?ref=bookmarks
View all posts by apenquotes →
This entry was posted in Carlsberg Brewery Malaysia Bhd. Bookmark the permalink.