There are many reasons why not to buy Cheniere Energy stocks as can be found in the article above.

With the markets rallying on Friday, come Monday, Asia markets (including Singapore Market) should open higher.

Ok, I have been thinking about oil & gas-related shares recently, specifically O&G shares listed in the Singapore stock market. It is not uncommon to hear about the opportunities of O&G counters in recent months.

Well, I might be a bit late in the game given the fact that most O&G counters has rebounded from their lows.

Since, we are talking about Singapore O&G counters, let me do a quick analysis.

Frankly, I do not intend to purchase any more stocks in the near term (given the recent rally). However, an analysis is always good for future market plunges. Or simply, just doing my ‘homework’. After all, fortune favors the prepared mind.

To further add on, cyclical stocks are typically hard to analyse, and for me personally, hard to invest. I have a terrible track record when it comes to cyclical stocks – and I am very bad at timing cyclical stocks. I would rather go for growth stocks.

All companies do better when the economy is growing, but good growth companies, even in the worst trading conditions, still manage to turn in increased earnings per share year after year. In a downturn, growth for these companies may be slower than their long-term average, but it will still be an enduring feature.

Cyclicals, by contrast, respond more violently than growth stocks to economic changes. They can suffer mammoth losses during severe recessions and can have a hard time surviving until the next boom. But, when things do start to change for the better, dramatic swings from losses to profits can often far surpass expectations. Performance can even outpace growth stocks by a wide margin. (read here)

There are currently 54 oil & gas-related shares listed in Singapore (this includes the drillers, service providers, and rig builders).

This is how I will structure the analysis.

In the article above (dated 2 December 2014), it mentioned that of the group of 54 oil & gas-related shares listed in Singapore, the below mentioned companies have the following financial characteristics:

The article mentioned above is a bit dated, but basically, all these companies have strong balance sheets, except for Keppel Corporation Limited. Among these companies, CH Offshore and Sinwa Limited stand out.

On the other hand, Keppel Corporation Limited has relatively high debt in relation to its total cash holdings and high total debt/equity ratio.

Peter Lynch who made many investments in cyclical companies, mentioned that cyclical investors need to think differently. He said that with most stocks, a low PE ratio is a good thing, but not with cyclicals. Buy high, sell low. Looking at the past PE ratios of Golden Agri (below), the PE ratios has been consistently high in recent years – so if that is the case, isn’t it not the time to sell?

In this article, it mentions that investing base on P/E for cyclical stocks is tricky: Investing based on a low price-to-book value is a much smarter strategy. When a company is priced below book value, investors are saying that its future is so bad that the firm isn’t even worth the money that management has spent on assets to conduct business. Buying at a price below NCAV allows you to achieve significantly higher returns than your peers when the industry eventually turns, while taking far less risk. The approach is to buy cyclical NCAV stocks when the industry is deeply depressed and then to sell those stocks shortly after they reach their average earning potential.

I can’t decipher much from the P/E chart. There isn’t any break out (to the high side) in recent times for these O&G stocks nor is there any general trends.

However in the P/B chart, the most obvious & consistent plunge in P/B is demonstrated by Keppel Corporation Limited  (from 4 to 1) and Mermaid Maritime, followed by Sinwa Limited and CH Offshore Ltd. 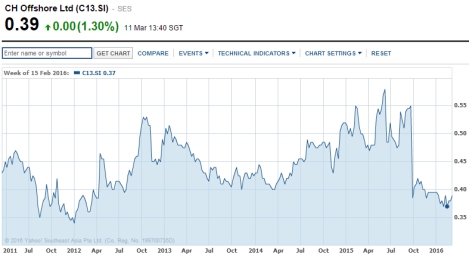 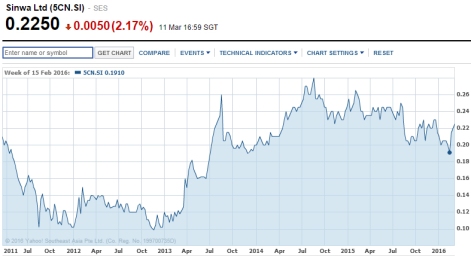 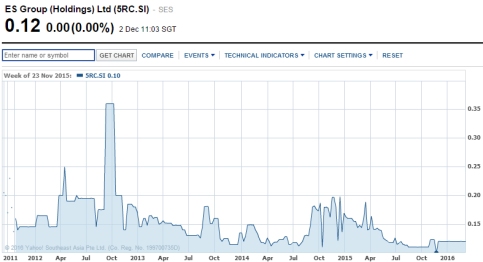 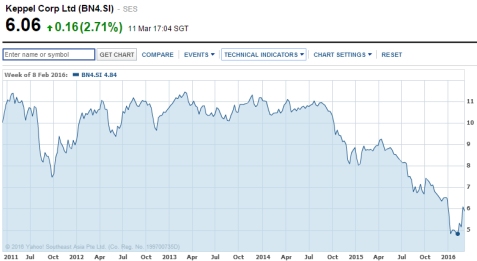 Looking at the stock charts, I can see that the stock prices of CH Offshore Ltd (SGX: C13) and Sinwa Limited (SGX: 5CN) are generally resilient. They did not plunge as much as the others. I reckon their very strong balance sheets help.

The stock chart of ES Group (Holdings) Limited (SGX: 5RC) is extremely lumpy, probably because it is the smallest cap stock (among the mentioned).

When I think about the above information, the plunge in Price to Book ratios for Mermaid Maritime Public Company Limited, together with its drastic stock price plunge is worth a second look. Keppel Corporation Limited is excluded due to its relatively poor balance sheet.

Incidentally, the directors of Mermaid Maritime recently issued a profit guidance announcement in respect of the Group’s audited financial results for the financial year ended 31 December 2015 (read here and here).

In general, the balance sheets of all the mentioned Singapore listed companies here are strong, except for Keppel Corporation Limited.

If we do not think about the stock price relative plunge and just base on the plunge in Price to Book values and good balance sheet, CH Offshore Ltd and Sinwa Limited would stand out as in the case for Mermaid Maritime, it’s debt value is more that twice it’s cash value.

Having said that, cyclical commodity O&G stocks are generally speculative, and are dictated mainly by macro economic and political factors. The price swings can be very extreme.

Gross profit margin for FY2015 was marginally lower at 23.7% from 24.1% in FY2014. The slight decrease was attributed to stiffer competition under weakened market conditions.
Net profit also saw an increase of 5.0% to S$9.6 million.
Commenting on the Group’s business outlook, Mr. Bruce Rann, Group CEO of Sinwa, said: “During a challenging year and the subsequent global ramifications of deteriorating oil price, we have realised a noteworthy set of results for the 2015 financial period.

“We have relied on our strong business model and despite the continued pressure on the oil price, operationally the business continues to perform well.

“We will continue to enhance our efficiencies with a view to provide our clients with increased service levels and savings.”
Source: Sinwa Group

How to Register A Shipping Company in Cyprus

Your email address will not be published. Required fields are marked *

END_OF_DOCUMENT_TOKEN_TO_BE_REPLACED

Please insert the code you see in the picture.

Born in 1976. Married with 2 kids (a boy and a girl). A typical Singaporean living in a 4 room HDB flat. Check out my Facebook Page: https://www.facebook.com/apenquotes.tte.9?ref=bookmarks
View all posts by apenquotes →
This entry was posted in Oil & Gas. Bookmark the permalink.