Of retail malls and banks…

The world is constantly changing. Traditional businesses are slowly replaced by new ones. In today’s dynamic world, the only thing that is constant is change. Let’s for a moment think about Retail Malls and the Banks. 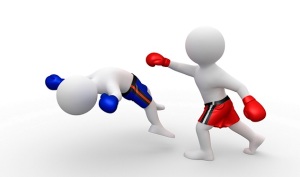 I was in Bugis Junction today. I did not stay very long there. As it was a Sunday afternoon, there was the usual crowd, not very big as tomorrow is the start of school and work. The weather was cool, and wet (these days there are intermittent showers all over the island). People might have preferred to stay at home in view of a possible drizzle late in the afternoon.

There are a couple of new shops, but what struck me is the numerous empty push carts. They are not just locked, but empty. For instance in the row of ten push carts, six are empty (see below). I don’t think this is a welcoming sight for shoppers. I do recall a time in the past when the place was more vibrant and when there were more small time retailers using these push carts.

With the rise of Online Shopping, traditional shopping in retail malls is getting affected. Sure the foot traffic may be just as high, but not as many people are buying. 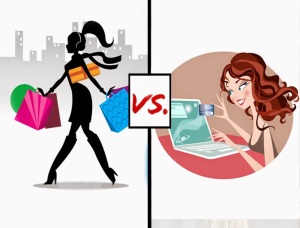 In addition to that, there is the opinion that in Singapore, there are too many malls in relation to shoppers, and insufficient differentiation in the stores.

Shopping malls here are ‘too many, too similar’ (read here)

Mr Kesri Kapur, Al-Futtaim’s head of business in Asia, said: “I personally believe that Singapore is ‘over-retail’. There are far too many stores, far too many malls in Singapore and not enough shoppers – and these are similar types of stores.”

I am curious as to know the exact online retail sales vs the brick and mortar sales figures. In the Retail Sales Index Food & Beverage Services Index (click here), we see that for October 2015, when compared to October 2014, excluding motor vehicles, retail sales decreased 4.6%. Compared to the same period last year, sales of food & beverage services declined 3.8% in October 2015.

However, there seems to be no differentiation or breakdown between in store retail sales and online sales in these numbers. The slow down in retail sales and F&B services can be attributed to a number of macro factors such as slow down in China economy, drop in tourist numbers, slow down in the local economy, strong Singapore dollar, high rental, more options for shopping (online + bulk order from overseas) etc (read here).

In another article, it states that “Last year, online spending here exceeded $1 billion, up 13 per cent year on year – beating the 12 per cent pace set in 2013 – based on data from British-based market research firm Euromonitor International. Footwear, apparel and electronic goods formed the bulk of the online purchases. Last year, total store-based sales in Singapore came in flat – at $30 billion – compared with levels seen the year before.”

Base on this “BRICKS & CLICKS SHOPPER TRENDS – Nielsen” report (read here), the main items shopped online is Fashion, Travel and IT Mobile.

Perhaps this article illustrates the rise of online shopping better. Revenue is to hit 4.4 billion in 2015. The trend is obviously upwards, and with brick and mortar sales stagnating (at 30 billion), one can assume that the trend moving forward is with online shopping.

Online shopping in Singapore according to statistics is not well developed, and is more popular with the younger & well-heeled  generation (read here). There could more development further in the future.

In the banking sector, after years of low interest rates, savers are starting to look elsewhere for higher yields. Be it Singapore Saving Bonds (2.8%), Singapore real estate bonds (read here), or stocks dividends. In recent years, the rise of P2P lending platforms (and other crowd funding platforms for real estates, private ventures, social enterprises, etc) provide another alternatives for investors seeking high yield (8 to 15%). There are now more and more online platforms appearing that help to link borrowers directly with lenders, bypassing the banks. 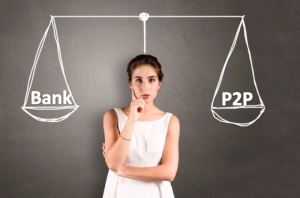 Essentially, P2P lending cuts banks out of the financing equation and lets both borrowers and lenders benefit. The graphic from Lending Club below illustrates this:

Is This a Threat to Singapore’s Banks? (read here)

Unlike what the article above mentioned, there are now a number of P2P lending platforms available in Singapore, such as MoolahSense, Capital Match and Funding Societies. Unaware to most, there are also a few platforms that have yet to be launched or under the radar such as Funding Straits and Invox. Things happen fast in the startup scene.

Is crowdfunding a serious threat for Singapore banks? (read here)

There are articles also stating that banks (in the US) are also joining (forming partnership) or using the P2P lending platforms. Banks hindered by the strict regulatory framework after the 2008 – 2009 GFC are seeking new ways to profit. Banks are held to strict regulatory standards which require them to hold a proportionate amount of capital determined by the risk level of their assets such as loans, and by the capital ratio. In Singapore, many crowdfunding platforms state on their websites that they are not currently regulated by the Monetary Authority of Singapore (MAS).

In fact, I am not surprised, if it is lucrative for the man on the street, I am sure the big boys (financial institutions) would want a big piece of the pie. There are worries that the institutional players would squeeze out the little guys and get the meatier deals (as was normally the case). Hey, if you can’t beat them, might as well join them – and make some money.

I won’t be surprised if this turn out to be another bubble (like the CDOs of the GFC), unless governments around the world start implementing strict regulatory rules (with regulatory bodies to implement & enforce them).

Recently, China’s banking regulator released draft rules for fast-growing peer-to-peer, or P2P, lending platforms in a bid to promote their development as a solution to small-business financing difficulties. It remains to be seen as to how effective these are in the P2P landscape there in China.

The rise of P2P lending in China is well documented (read here).

To digress a bit, from another angle, companies can also get funding from Venture Capital or Private Equity, besides via IPO. In fact, if I recall correctly, today’s Sunday papers mentioned about the low number of IPO listing in Singapore market and the dire situations of brokers here. This is partly attributed to the fact that companies are able to seek fund elsewhere eg. Venture Capital or Private Equity. The unspoken culprit here could also be P2P lending, although these cater to really small and short term loans of approx. above $100,000.00 and less than 12 mths. These loans are typically for small companies. However, these SME represents the bottom of a big complex pyramid, and liquidity once in will find its way around.

Again I am curious with the statistics of bank loans to companies in Singapore. Base on charts found in the Monthly Statistical Bulletin by the Monetary Authority of Singapore (click here), the DBU’s (Domestic Banking Units) loans to non-bank customers appears to be decelerating from a year ago (see below). 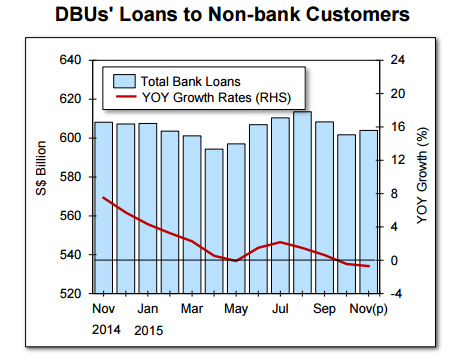 The DBU’s Non-bank loans in the commerce sector, transport, storage & communications, and non-bank financial institutions appear to be falling year on year (see below).

These charts do not tell us much about the rise of P2P lending to SME (and how they affect loans issued by banks) in Singapore. With the rising interest rates and lackluster economy, a drop in bank loans is expected. There is no breakdown or separate statistics figures for P2P lending figures in Singapore.

In conclusion, for me personally, sometimes reading the headline news is not enough. One should try to know the actual statistics and trend behind the news. Although I am typically adhere to a bottom up investing strategy (eg. studying companies’ financial fundamentals and narratives), it helps to observe the macro trends and see if the fundamentals of the companies tally with the macro trends.

Born in 1976. Married with 2 kids (a boy and a girl). A typical Singaporean living in a 4 room HDB flat. Check out my Facebook Page: https://www.facebook.com/apenquotes.tte.9?ref=bookmarks
View all posts by apenquotes →
This entry was posted in P2P. Bookmark the permalink.