In today’ busy Singapore, cooking at home seems to be a luxury for families whereby both parents are working. However, with an abundance of food catering companies here, eating delicious, freshly cooked and healthy food is becoming easier. In a nation obsessed with good food (we all know that our national favourite hobby is food), the food catering business here seem to be flourishing.

Ordering of food via telephones and the internet has never been easier. Indeed, the use of digital ordering strategy is a global trend (read here), whereby companies like Domino’s Pizza, Neo Group Ltd and Sakae Holdings Ltd are already investing in the Online Order System here to drive sales.

One such food catering company is Neo Group Ltd. It is recently listed in the Singapore Market (July 2012).

Its business can be broken down into 2 portions: 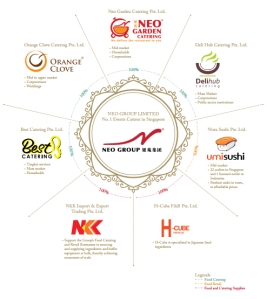 Strong growth in the food catering division bolstered full-year (2014) earnings at Neo Group. Net profit for the period to March 31 rose 15.7 per cent to $7.4 million, compared with the 12 months to Jan 31 last year. Revenue jumped 47.8 per cent to $77.4 million in spite of an approximately 51.8 per cent hike in expenses. (read here)

However the above mentioned figures may be misleading as it takes into account 14 months.

The company’s growth story has been continuing well so far (read here). 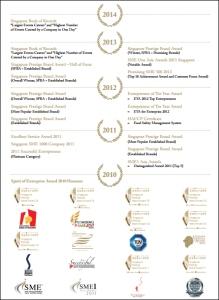 On 14 May 2015, Neo Group announced that they will pay S$7.35 million in cash and new shares in exchange for a 55 per cent stake in Thong Siek Holdings (read here and here).

Despite its short history in the Singapore Market, the stock price of the company has been progressively moving up, but in recent times, prices have dropped. The share price of $0.815 on 7 July 2015 is just a hairline above the 52 weeks low of $0.80. Kind of remind me of another F&B company – Japan Foods Holding Ltd (read here). I am unable to find out exactly why the share prices of Neo Group dropped. 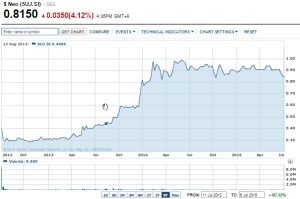 There are many plus points in this company: 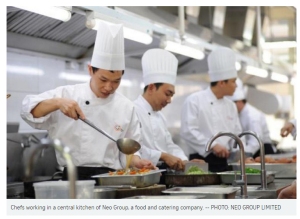 Nevertheless there are risks which I feel warrant some concern:

Its revenue, net profit, total assets and earning per share have been trending upwards year after year.

However, its free cash flow is worrisome. (FCF = Operating Cash Flow – Capital Expenditures). Neo Group’s FCF is lumpy and seems to be getting worse. It could be due to the recent expansion spree (eg. Enterprise Road facility).

A quick look at its financial statistics:

My thoughts on the statistics are as follows:

It is not possible to get the 5 yrs CAGR of Neo Group’s EPS as it was only listed in 2012.

If we calculate the intrinsic value using a growth rate of 24.48%.

I will be estimating the future PE of Neo Group Ltd to be 19.9 (See below, data from Morningstar)

Neo Group Ltd has consistently performed well over the past few years. However as it is only recently listed in the Singapore Stock Market, not much historical data can be obtained. The recent strong performance may not translate into long term stellar performance.

Nevertheless, it is expanding fast and is quickly gaining market share. But on the flip side hiring new staffs is costly.

Its recent net profit result as compared to previous year’s result (12 months) is not outstanding.

Its free cash flow is lumpy and has a downward trend over the years. It has a high debt to equity ratio which is worrisome considering that interest rates will rise soon. P/E & Price to Book value are relatively high.

Therefore I would be hesitant in buying the shares of Neo Group Ltd.

Born in 1976. Married with 2 kids (a boy and a girl). A typical Singaporean living in a 4 room HDB flat. Check out my Facebook Page: https://www.facebook.com/apenquotes.tte.9?ref=bookmarks
View all posts by apenquotes →
This entry was posted in Neo Group Ltd. Bookmark the permalink.