I treat studying companies and investment strategy as my hobby. During the recent Lunar New Year break, I managed to have some time alone to surf the internet on these. I get to read all kind of nonsense on the web (on top of watching all kinds of crappy chinese movies on TV yippee!) 😛 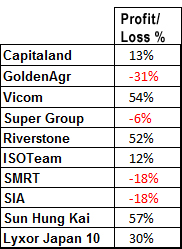 Well, I am only showing the percentage in terms of unrealized loss & profit (excluding dividends).

There was a time not too long back (3+ years is not long) when it was all red. See table below for my portfolio results in 30 Nov 2011:

Some people would probably freak out at seeing all red. And I admit that it does test my limits and beliefs – esp. when the paper loss can stretch for years.

I am not a macro kind of investor (studying the macro economics and overall market movement etc) but I feel that we are in the late bull, where the big easy names / companies with diversified revenue and fat gross margins will shine. (read here) Names like CapitaLand, Sun Hung Kai, Apple, Walt Disney etc. It will get harder to find bargains – but there are still bargains, so don’t stop researching and reading. And of course, do increase your war chest ammunition.

I have a habit of focusing more on the reds (paper losses) than the blacks / greens (paper gains). And among the reds, Super Group Ltd piqued my interest the most (while I have been considering in adding to my positions in Golden Agri given the shares / industry historical low price). Super Group Ltd has a price/ book of 2.80, and a Trailing PEG of 0.59 (Which I recently calculated), and EPS growth(5 years) of 31.05. I have also recently added a small amount to my position in Super Group Ltd.

I came across this Jan 2014 post on Super Group Ltd being the best takeover option for beverage companies. (read here)

Tokyo-based companies such as Kirin, Suntory Beverage or Asahi Group Holdings Ltd. would probably have to pay more than S$5 a share to buy or take control of Super, said Maybank’s Koh.

Now if all things being equal, given the drop in share prices from Jan 2014 until today, wouldn’t Super Group Ltd look even more tempting? Super Group Ltd share price on 18 Feb 2015 is 1.1850. Of course things now aren’t exactly equal or same as compared to Jan 2014 (after the few quarters of bad results etc). Nevertheless, given the issuance of one bonus share for every existing share on 26 May 2014, then technically, the “$5 a share” as stated above would be “$2.50 a share”. But that is still more than double the current share price. No business is perfect, and it really doesn’t matter what is the P/E of the company is in relation to the P/E of Index etc. To me a big part of intrinsic value is what another business man would pay to buy that company.

The share price of Super Group Ltd has been progressively moving downwards due to the poor earning reports for the past few quarters. On some days it might appear excessive.

Net profit in 2013 is $100 mil. If you exclude the one off gain when Super Group disposed off an associate, Sun Resources Holdings Pte Ltd ($17.1 mil)  & in December 2013, when an overseas subsidiary disposed of a plot of its leasehold land and the transaction gave rise to a gain of approximately S$2 million that was recorded in the fourth quarter, net profit will be $80.9mil (read here)

Put in another perspective: if we consider the takeover offer mentioned earlier by Maybank’s Koh (in Jan 2014), which value the company at $2.5 ($5 before the bonus rights issue) a share and the share price of $1.185 on 18 Feb 2015, the drop in share price will be approx. 53% (more than the anticipated % drop in profits). While a S$5-a-share bid would value the company at S$2.79 billion ($2.2 billion). Currently the market cap. for Super Group is only S$1.33B, that is also approx. 53% lower. However, we do not know the full year (2014) profits yet and analysts do tend to be more optimistic at times when valuing companies- so it is just an estimate.

The next question is Super Group Ltd a company in a terrible business?

Similarly, are Golden Agri, SIA or SMRT in a terrible business. It might appear so for these 3. SIA is in the highly saturated, unregulated airline business while Golden Agri business of supplying palm oil is currently facing an unprecedented oversupply glut (with a corresponding drop in soybean prices). Given the choice, like what Warren said, one should avoid difficult business, this is no Olympics – it doesn’t matter how much effort you make to earn that $1, at the end of the day $1 profit is just $1 profit – degree of difficulty does not matter in business (better to jump over a 1 foot bar than a 7 foot bar). It is simply not worth it to be in a tough business.

Investing Legends have made blunders before: falling for cheap companies in terrible business – value traps (eg. Warren with Berkshire Hathaway and Eddie Lampert with Sears). Only difference is that they have the capital to change the company (Read here). Super Group is definitely in a cut-throat industry, especially with so many competitors. But it is not in a sunset industry – there are new markets (Mongolia & India) to target, busy middle class people who have just awaken to the convenience of instant 3-in-1 coffee sachets.

With the rising popularity of pressure-based brewing systems that produce individual cups of coffee/tea, will this pose a threat to instant coffee mixes that come in neat little satchels? Even my company has a pressure based brewing machines in the pantries. However with a price tag of $200 to $300 per machine, and a capsule costing approx. $1 dollar, the cost will be much higher than a packet of 3 in 1 coffee mix packet with 30 satchels costing approx $5 (approx. 17 cents per satchel). However, it could be argued that the quality of the coffee from a pressure based brewing system is superior than that from a 3 in 1 satchel. And what is a few cents or dollars to a Singaporean who wants premium coffee that is fuss free & instant (cost wise it still arguable if it is as economical as just getting coffee from Starbucks)? But then again, to a low income earner in Myanmar, it would be another story.

Could this be a reason for the loss of Super Group’s combined brands’ market share? (read here and here). Wonder if Super Group would be able to produce a premium brand of coffee good enough to rival that of Nespresso, or would they be stuck in the low-loyalty segment, fighting on too many fronts?

On another note, some would say that the younger generation is not really into powdered coffee but instead are more interested in ready to drink coffee. (think Ya Kun & Toast Box even McCafe) Where Super Group’s Owl cafe is also lagging way behind.

Companies that refused to change or waited too long were worse off than those that took the risk to embrace change earlier.  In any time of change, there will be winners and losers.  Just because you try new things doesn’t mean that you will be successful.  But, new companies and transformed companies will be at the forefront of innovation and success during times of rapid change.           Eddie Lampert

No doubt Super Group has been a ten-bagger, and has made Mr Teo Kee Bock one of Singapore’s richest men, but are Super Group products still relevant?

However, I would like to take a step back and ponder (away from what is written in the internet & media & forum etc). I always wonder what would Warren Buffett or Peter Lynch think if they were looking at this business. (if we exclude the figures)

I can’t help but see the similarities between Super Group 3-in-1 satchels vs Nespresso and Gillette Sensor Razor vs Philips Shaver. Warren for one bought Gillette in 1989. in 1989, the company redefined the industry with the introduction of the Sensor Razor. I am sure at that time, electric shavers were also commonly used- why didn’t Warren worry about Philips Shaver overtaking Gillette razors? Or why didn’t he invest in electric shavers instead?

There are many ways to drink coffee. In the past it is common for people to buy coffee powders (grind from roasted coffee beans) from provision shops & hawker centres and brew the coffee using a bag & tin, or buy kopi-O from coffee shops or hawker centres. Then came Starbucks (the first Starbucks store opened on 14 December 1996 at Liat Towers), Coffee beans, Ya Kun, and also the 3-in-1 satchel in 90s. Then of course now we have the pressure-based brewing systems.

There are also several ways one can shave one’s beard :p By going to the barber, using a disposable razor or electric shaver. It is also arguable how clean a cut one can have using a premium philips razor vs a disposable razor.

I think there is a niche for 3-in-1 instant beverages.

Peter and Warren would have liked Gillette because their products are low-tech, easy to understand and disposable (repetitive nature of the product that is relatively immune from technological obsolescence and recessions). Well so are 3-in-1 satchels. Now we won’t find this same principle with pressure-based brewing systems – there is always a new & cooler model out there (that is ridiculously priced, and more often than not became white elephants in the house). Perhaps it is not about going into premium coffee with cool pressure-based brewing systems but by perfecting the 3-in-1 satchels.

On the issue of being in a tough business with many competitors, another segment which Super Group is into might offer a different picture: Food ingredient. This segment may be a sustainable operation with opportunities to expand as competition is very low. Not as “glamorous” as the Business Consumer segment but it is a major contributor to their profits.

I do keep a look out for Super Group products when I go to Super Markets. At NTUC sometimes I will see sales people introducing the products and even promoting offers. At Sheng Siong (the outlet near where I am staying), there is a shelf prominently located dedicated solely to Super’s products (these out located out of the inner aisles and facing the main aisles). However, in the case of Cold Storage and Big Box – I don’t see any tie ups.

Moving on, I did not add significantly to my positions as I felt that the current stock price is above its intrinsic value. However, I feel in the near term the stock price will rise (once the teething problem of Thai Political issues, Malaysia GST issues, high cost of raw materials and low exchange rates of Malaysian / Indonesian currency is resolved / factored in / forgotten). To me – all these external macro problems are the same problems Super Group’s major competitors face (I am sure Nestle and Old Town will have to deal with Malaysia GST requirements as well). These are not fundamental issues within the company. Super Group is actively expanding into other markets, and diversifying the risks. Price will go back to the “growth” mode – albeit at a slower growth rate. A bad quarter or maybe even a bad year won’t matter.

In the meantime, it is back to reading more news and watching the paint dry and hope for prices to drop on some bad news.

Born in 1976. Married with 2 kids (a boy and a girl). A typical Singaporean living in a 4 room HDB flat. Check out my Facebook Page: https://www.facebook.com/apenquotes.tte.9?ref=bookmarks
View all posts by apenquotes →
This entry was posted in Super Group. Bookmark the permalink.