I have been eyeballing a few companies recently. However their stock prices just seem to keep going higher and higher.

I am already a share holder of some of these companies. Although it is comforting to know that their fundamentals and growth potential remain strong (and that their share prices reflect that), at times I do wish that I can have a chance to buy on dips. 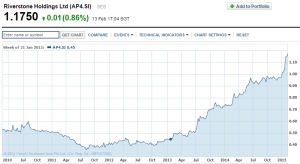 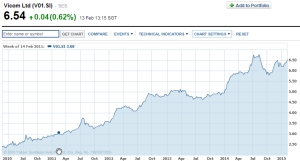 Even those companies (in my portfolio) that are not strong fundamentally, their stock prices have risen recently (some what). Not that I am thinking of adding to these positions. 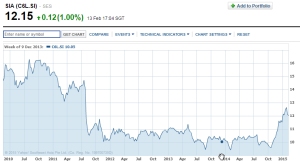 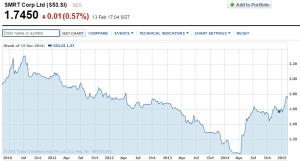 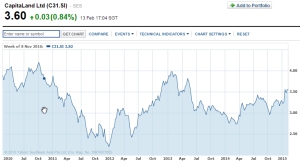 From a Value Investing point of view, this may not be a good time to be thinking of buying shares. Am not particularly keen on momentum investing either (buy high and higher). I have been through that stage and I do not enjoy the process. Yeah, I didn’t lose big but neither did I profit much…. but it sure was stressful knowing that the price I bought is not sustainable.

However, Warren Buffett and Peter Lynch have added into some positions even after they have risen considerably. Value + Growth investing.

In a PBS interview in 1996, Peter Lynch cited Wal-Mart as an example of a tenbagger that investors had plenty of time to buy. He said that investors who had purchased Wal-Mart 10 years after it went public in 1970 would have still made 30 times their money.

In an ideal situation, it would always be good to be bottom fishing excellent companies when the market crashes and thus achieve a good margin of safety (it’s a no-brainer). However, nobody can time the market. And bottom fishing without knowing what you are buying is not the best way to go.

“The best stock to buy may be the one you already own.” Peter Lynch

Ben Graham had a lot to learn as an investor.  His ideas of how to value companies were all shaped by how the Great Crash and the Depression almost destroyed him, and he was always a little afraid of what the market can do. It left him with an aftermath of fear for the rest of his life, and all his methods were designed to keep that at bay.

“I think Ben Graham wasn’t nearly as good an investor as Warren Buffett is or even as good as I am.  Buying those cheap, cigar-butt stocks [companies with limited potential growth selling at a fraction of what they would be worth in a takeover or liquidation] was a snare and a delusion, and it would never work with the kinds of sums of money we have.” Charlie Munger

I have always wanted to keep my portfolio small. However, it is  not easy to just wait for your good stocks to fall to the level when you feel that it is undervalued (and that level will seldom be the price you bought years ago unless we have a major recession or correction). And there are always good companies out there who seem to be undervalued at this moment. Yes, there are companies that go higher, and higher and higher despite recessions…… Or are undergoing a sudden price drop due to some current issues.

“We try to buy into businesses with favorable long-term economics. Our goal is to find an outstanding business at a sensible price, not a mediocre business at a bargain price.” Warren Buffett

Take for example, Riverstone and ISOTeam. Right after I bought them – their stock prices never did actually dip much below my purchase price. And I don’t normally buy a lot of shares for one company initially. Wanted to buy more but don’t want to pay more. So in the end, there is always this quest to look for a better ‘bargain’ elsewhere, in other companies.

But before we buy into a new company, what if the current stocks we are holding are indeed undervalued (even after rising “this much”). As Peter Lynch says, the stock prices will eventually match the earnings – and if the company’s earnings are indeed increasing exponentially, there could be a chance that the current stock price does not match the earnings ..yet (or rather future earnings). So mentally it is not like (shopping centre buying or supermarket buying) buying a jacket at $X, and hoping to buy it again at $X or less. A company is not a jacket – it literally grows (well the good ones at least).

So what better time to consider then now? Given the recent onslaught of year end financial results release? I don’t think I would be sitting on my butt hoping for a market crash to bottom fish – I probably would be looking at their financial reports and thinking if they are growing as expected. Some people might have been faster like jumping into similar companies after reading that so-and-so companies have great earnings (take the recent price hike in Colex, shortly after 800 Super’s good financial release).

The hard part in investing is probably trying to make informed decisions based on things that have yet to happen. (read here) A quote from Peter Lynch’s book “One Up on Wall Street” (1990) about his experience with Subaru demonstrates this: “If I’d bothered to ask myself, ‘How can this stock go any higher?’ I would have never bought Subaru after it already went up twentyfold. But I checked the fundamentals, realized that Subaru was still cheap, bought the stock, and made sevenfold after that.” The point is to base a decision on future potential rather than on what has already happened in the past.

Looking forward, I spotted new events that could alter the course of some of the companies which I am currently invested in. For example, in the case of Super Group – there  is evidence of a slow recovery but the Malaysia GST that will come into effect in April 2015 may have an impact on their earnings. But I believe in their management’s ability to mitigate the issues (if any).

I chanced upon this chart known as Peter Lynch Earnings Line. “A quick way to tell if a stock is overpriced is to compare the price line to the earnings line.” And not the stock price itself. Well at the moment I am not a member of GuruFocus Premium Membership – so am unable to study that. I can only rely on the PEG ratio and intrinsic value to access if the stock price matches their (future) growth rate.

Even Warren Buffett is unable to foresee the 2008/09 financial crisis. Just look at his foray into Wells Fargo: Here was a situation where you had the most famous investor, who is one of the best stock-pickers in the world, pay 5x the price of what the stock would trade at just two years later. He did not let future price downturns cause him to regret his buy decision, he simply take this as an opportunity to increase his ownership position with an added margin of safety. Heck, Warren’s stake in Exxon Mobil went nowhere given the recent oil crash, and it could even end up like his previous loss with ConocoPhillips.

Frankly, I will not be surprised if we do have a crash in 2015. And I do hope that by then I would have enough cash on hand (and enough guts) to add to my positions. It is easier said than done. However, I am sure most of the companies I am holding would not tank in  a recession (frankly that is about the only & major mental preparation I ever had). It is really very hard for a debt free company to go bankrupt.

“Events occur – hurricanes, wars, political instability, currency and bank crises – that make investors nervous and cause market volatility. It does get nasty at times, but it shouldn’t cloud investors’ judgments about thinking long-term. The key organ here is your stomach. Everyone has the brainpower, but not everyone has the stomach for it.” Peter Lynch

“Companies that have no debt can’t go bankrupt.” Peter Lynch

Moving forward, I do find it harder to find value companies, and psychologically it is hard to convince myself that there are still bargains out there (tend to think back on my previous assessments of the companies).

Corrections and crashes are inevitable. Why not just cash out and take a break?… or wait and hope that I have a multi-bagger in my portfolio. Currently for most of the stocks I am holding on to, the PEG is not significantly above 1, and there are still room for growth. I don’t really have the habit of selling my shares – even for lousy performing ones (just stop buying them).

And I also don’t have a habit of telling friends or relatives how much I profit from my stocks (or my losses from my stocks). I think this is important, as I do not want them to influence me when the market crashes. When things are rosy nobody makes noise – but when shit happens – that is when we know what kind of investors we each are (or what kind of investors people around us are). I want to have the unbiased option and opinion to add my positions. Most people would think that this is suicidal, if they do not understand the reasons behind my buying (that is the perverse side of value investing). There are times when all my counters are deep red (kind of like a murder crime scene), ain’t pretty. But that is the nature of stock prices, they fluctuates. And there was a period of time when I ONLY bought shares in my portfolio that are red eg. am having unrealised losses – the redder the better. Don’t really recommend that unless you are very convinced that the stocks you are holding are shares of great value-growth companies.

Price and patience is the key to stock market profits.

Born in 1976. Married with 2 kids (a boy and a girl). A typical Singaporean living in a 4 room HDB flat. Check out my Facebook Page: https://www.facebook.com/apenquotes.tte.9?ref=bookmarks
View all posts by apenquotes →
This entry was posted in CapitaLand, Colex, ISOTeam, Riverstone, SMRT, Vicom. Bookmark the permalink.

3 Responses to High and higher